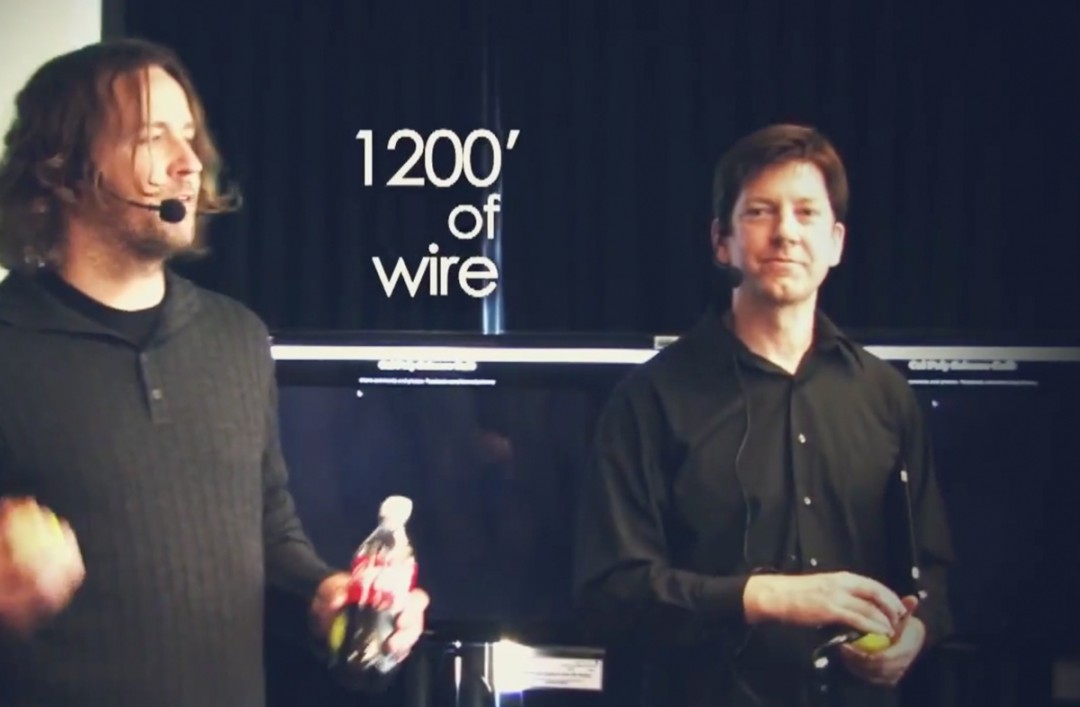 Four flights of seventy-two stairs were transformed into a giant game board using 1,200 feet of wire and 48 Internet-connected tin cans decorated with green and gold helium balloons at DIY: Physical Computing at Play. These were our targets.

The customized game was conceived after we invited designers and web developers Michael J. Newman and Scott Hutchinson to Kennedy Library at Cal Poly in San Luis Obispo, to present at Science Café, an ongoing community series. They made a couple of drives up from L.A. to find inspiration and check out our Brutalist building. The two saw our dramatic stretch of concrete stairs and knew they’d found their game board.

At the event, participants built and tested simple circuits then rigged our staircase using the wire, cans and balloons. Then we aimed and threw tennis balls down the stairs, hoping to knock over the cans, which acted as live switches on foil tape. Cans were attached to a breakout box by 25’ wires, and a live site updated the score whenever a can from either the green or gold team was knocked over. Working with the library’s IT group, the site was shared on digital displays throughout the building as well as on participants’ mobile devices. Cal Poly linked to the scoring site from the university’s home page.

Partnering with on and off campus collaborators since 2009, Cal Poly Science Café has offered experts who tell stories, give demos and invite people to play hands-on. Inspired by the international Science Café movement, which is often held at a café or pub, our events are offered in the heart of an open, accessible and collaborative area at Kennedy Library. It’s where a current English major and a retired community member can work together on a customized computer science experiment that becomes an interactive art installation. Everyone is invited and it’s always free.

Watch an interview with Newman and Hutchinson about their thinking and the details of the back-end. Go to Cal Poly Science Café for source files and more info.